After Becca and Rich left and we were safely anchored in the harbour, we turned our attention to the broken autopilot. Here is another photo of where the plate was broken. 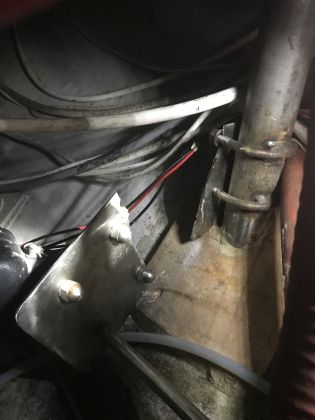 We posted the video on the last blog of Mike in the hole. He had his zippy tool in there, making room for a nut that the installer ground off. I guess it was easier to grind the plate and nut than to remove some of the wood used in securing the post that the plate attaches to.

We made a diagram of what the new plate would have to look like. 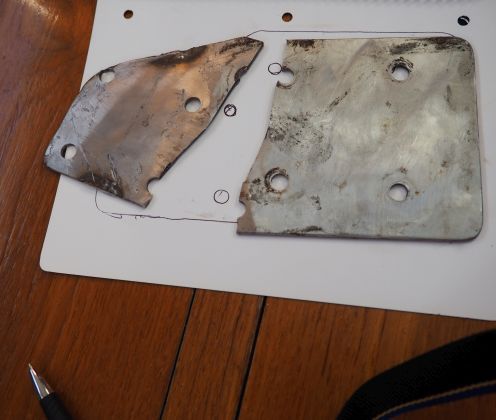 The rest of the afternoon was spent going through photos and starting the blog of Scot’s family visit. So many photos! We also dinghied in to get a few groceries.

Well, waking up alone seemed eerily quiet and actually empty with no one with us on the boat. We had back to back kids for 3 weeks, so not only did we have lots of suitcases around but we also had lots of conversations going on, as you can imagine.

After breakfast, we dinghied in with our broken plate, in search of a machinist. We stopped in at Brown’s Basin, which is just across from the dinghy dock. The lady there gave us the name of a guy right at Brown’s marina. So, we found him and he said he could make it and it would be $40.00. Score! We decided we would give him $60.00 as we were so pleased with the price. And it would be ready that afternoon by 17:00. Bonus! When we picked it up, he had changed the price to $50.00 so not sure if it had taken more time or if he forgot the price he told us. Lol. Anyway, we had the $60.00 ready for him and he was happy to get it. He mentioned that if the holes didn’t line up right, to bring it back and he’d fix it. It came with a guarantee, another bonus!

We have to say that the local folks we have met in Nassau have all been so nice. Whenever we were out walking and would meet someone or they would pass us, they would always say hello and ask how we were doing. The dinghy dock at Brown’s marina is much to be desired and I mentioned from our first time tying up there when the tide was out, it was a long way up to climb off the dinghy. Well, after our second or third time there, the lady that owns the Rubis convenience store was pumping gas for one of the fishermen. She told us to tie our dinghy up by one of slips by a ladder. We said “are you sure?” and she said “I run this place, no need for you to hurt your knees trying to climb way up from your dinghy, use the ladder from any of those boat slips.” That made getting up from the dinghy so much easier; especially with a dress on. 🙂 We also met a very nice man at Starbucks the day we were waiting for Scot to arrive. He was a diplomat and lived in Ottawa for quite a few years. Mike saw him a few times after in there as he would go in for a coffee while waiting to for his granddaughter to finish school. All our kids commented on how friendly the local people were. Mind you, we were up on East Bay Street and downtown is on West Bay Street and more congested. That seems to be where a lot of crime takes place at night. Actually, that man at Starbucks told Mike that on every street corner down on West Bay Street by the Straw Market there were always 2 police officers. I did notice that when down there with Scot and family.

We also heard from Jim that evening. He and Cheryl were staging to cross over to Nassau the next morning and would see us on the 24th.

First thing in the morning after breakfast, Mike got right to work on getting the autopilot back together. Luckily the holes all lined up. 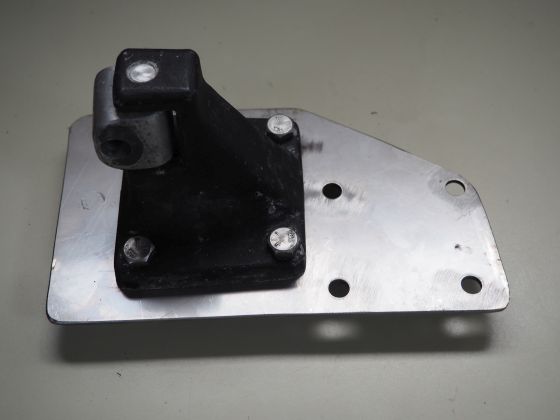 Then came the hard part! Mike had to get back in the hole again. It was a very hot day. After almost 4 hours, the autopilot was back together. His ribs were sore before from taking it apart and were much worse after being in there off and on for so long. Ta-dah, a shiny new plate on the autopilot and all back in place!

Mike also installed a new impeller and belt for the raw water pump. And not a moment too soon either, as you can see from the worn belt and damaged impeller. 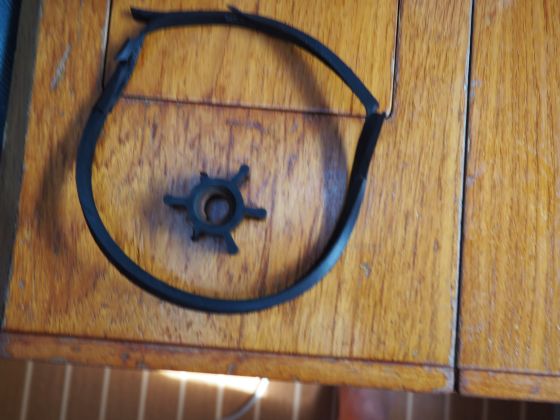 We were certainly glad to have those jobs done. That was a busy day!

The wind had been blowing for a couple of days and it was rather rough in the anchorage. But at least, we didn’t have any repairs or work to do on the boat. We finally got the blog finished of Scot, Jody and Margie’s visit. The only problem was that we didn’t have enough data left to upload it. We dinghied in to Starbucks and while enjoying a frappacino, Mike got it uploaded. It was nice reminiscing and seeing it on the blog. We had a great time having them on board. Then we walked to the store and bought a water hose. Mike wanted to look for a water catchment system for when it rains to fill our water tanks.

Jim called that night and they had quite a rolly trip crossing from the Abacos. They landed at Rose Island early in the evening. It is an hour from there to Nassau but they had been on the water long enough. They set the anchor and basically crashed. Those ocean trips can be so tiring, especially if they are rough going. We made plans to walk for lunch the next day when they’d arrive in Nassau.

We had a lovely sunrise.

We had breakfast, showered, and then did a good cleaning on the boat. Even got the floors scrubbed. Since Mike got all the salt and sand washed from the boat and cockpit while we were in on the dock, it felt nice to have the rest of Persuasion cleaned. We heard someone whistle around 10:30. It was Amazing Grace pulling in to anchor. 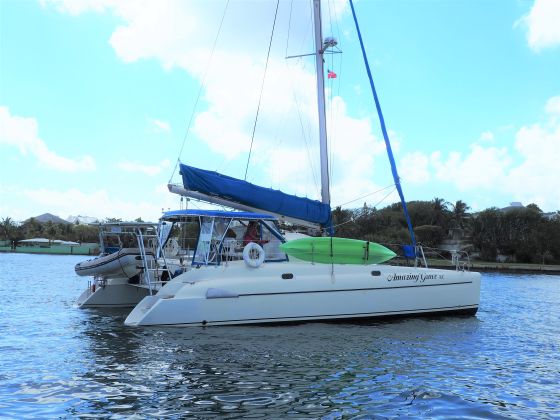 It was great seeing them again. We sat awhile and got caught up on each other’s adventures. Then we got in our dinghies and headed to the dock. We walked down to Potters Cay Dock. Notice the little shacks on each side of the bridge. 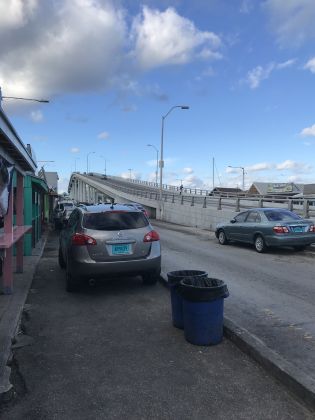 This is what it looks like from the waterside. Each little shack serving up their specialties.

We went to McKenzie’s where we had gone with Scot, Jody and Margie.

This guy is fast with a knife and makes great conch salad. 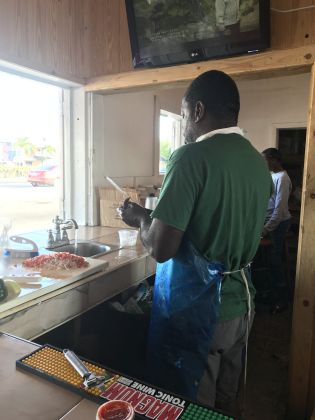 We were able to get a booth overlooking the water.

We ordered and then watched some spotted rays in the water. So many! 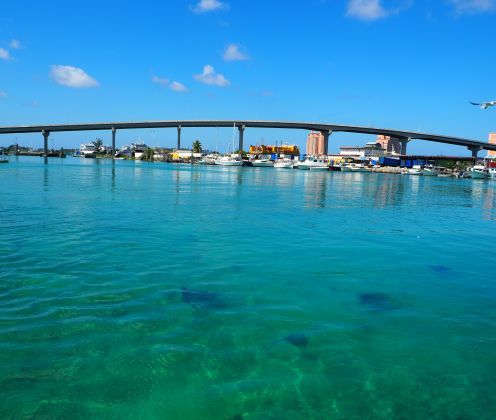 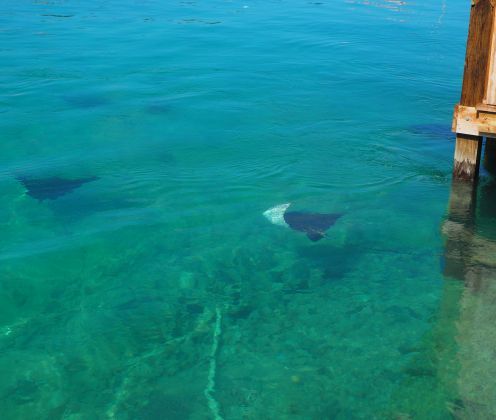 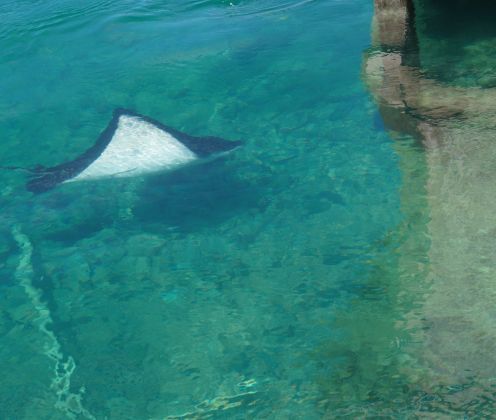 Well, the waitress brought our meal. Mike, Cheryl and I ordered the fish burger with fries. I had the fish burger when Scot visited and knew it was excellent. Jim ordered fish and chips. We were all rather shocked when it came. It was the whole fish, eyes and all. And it was full of bones. He didn’t eat much of it. The waitress snapped a photo of us. Too bad we hadn’t gotten one of the fish.

After lunch, we walked back to the grocery store, got a couple of things and then enjoyed sundaes at Dairy Queen.

Being such a nice day, we dinghied back to the boat and decided to motor over to Rose Island. Just look at this massive place being built on the end of Paradise Island. 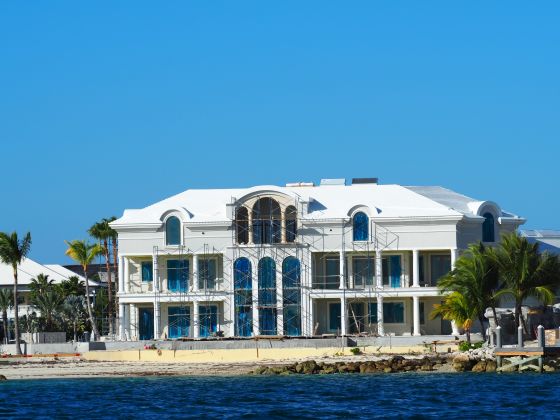 And this ultra modern one. 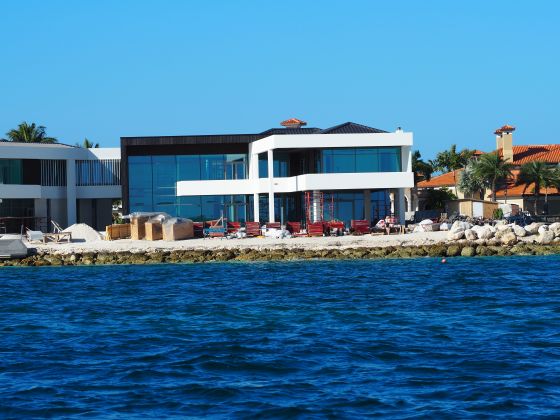 I got this shot of Atlantis on Paradise Island when we were almost over to Rose Island.

We anchored on the north side of Rose and then had supper on Amazing Grace.

Wow, we awoke to a glorious sunrise!

Then, after breakfast, we started working on our water catchment system. So, as usual when there is work to be done on a boat, things have to get moved around to work so the whole boat is in a mess. Lol. All the cushions had to come off and the board removed to start drilling a hole in the wood for the hose to fit through so it could go in to the tank. 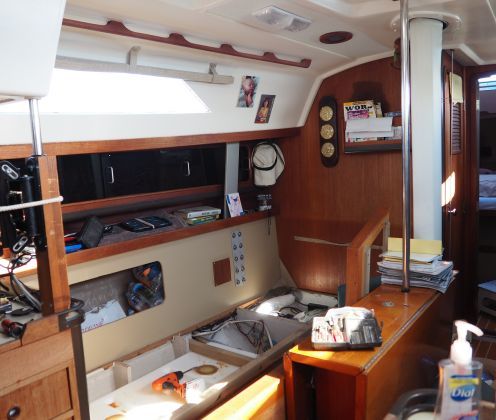 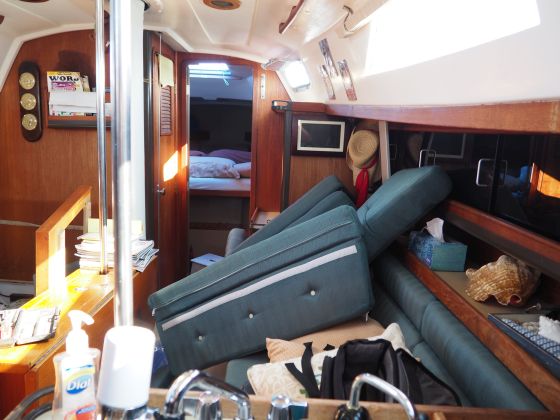 Jim and Cheryl dinghied over to see what we were doing. We took a break, (well it was a really long break) and visited out in the cockpit. We had invited them over for brunch but when they saw the mess, they said to bring the bacon and eggs to their boat and cook it there. Looking again at the mess, I certainly agreed! We ate out on the deck of Amazing Grace under the sun shade and enjoyed the beautiful day.

Jim and Cheryl were going to stay at Rose Island for a couple more days. Their granddaughter, Angelina and her friend were arriving in Nassau on March 1st.

We decided we should pull up anchor and go back to the Nassau harbour. We needed to finish our project and get ready for Sarah the next day. So we said good-bye to Jim and Cheryl and were off.

We anchored and then finished up our project.

It was a busy morning. After breakfast, we went in for groceries and then finished cleaning up. After lunch, I had it all set up for baby Finnegan.

We were all ready for Sarah, James and Finnegan.

During our 6 days between Becca and Sarah’s visit, we got some maintenance and work projects done on Persuasion, got a blog posted and had a fun time with Jim and Cheryl. We had travelled 12 nm those days, going to Rose Island and back. We dinghied back in around 13:00 to wait at Starbucks for them to arrive. We were both excited to see how much Finnegan had grown since Christmas. 🙂