This morning, we pulled anchor at 06:35. Thank goodness it wasn’t foggy like yesterday although the low-lying clouds lingering in the mountains made for some good shots. 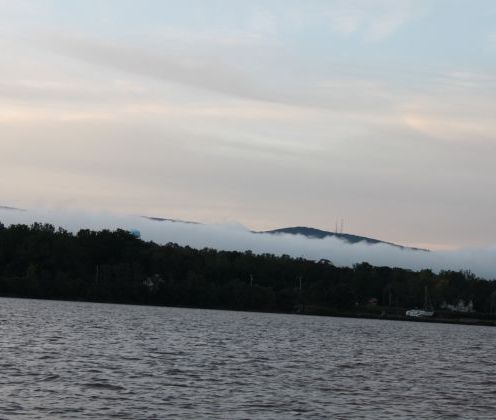 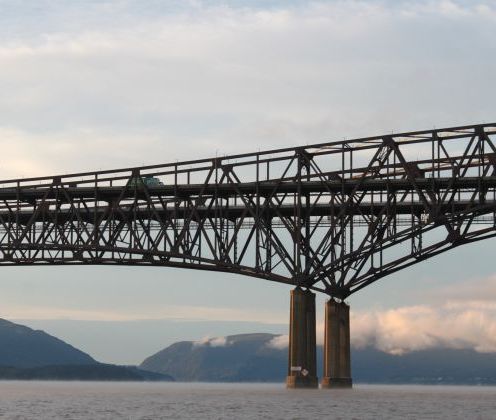 We motored through a patch of fog lifting off the water. There was also a mixture of sun and very dark clouds. It is very beautiful here.

Getting close to West Point, we hear a train whistle. Posting this for all our railway friends. 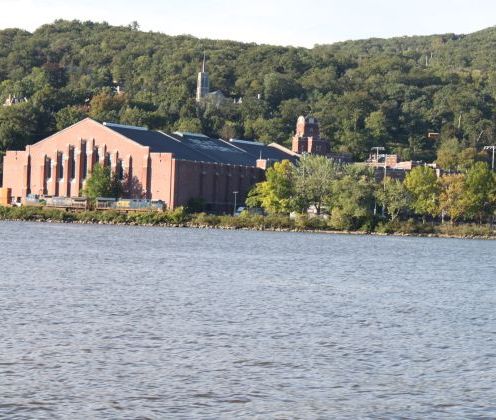 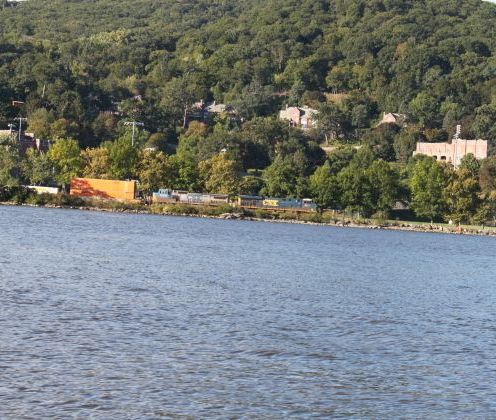 And West Point, you never disappoint. West Point dates back to the early 1800’s when President Thomas Jefferson set plans in motion to build the United States Military Academy at West Point, New York. It is the oldest; continuously operated military post in America. The Academy is a four-year coed federal service academy. It is massive and every time I see it, brings back memories of the mini series, North and South. The story line follows two friends, one from the North, the other from the Deep South, who were army buddies at West Point and then the civil war breaks out. Such a great show, starring Patrick Swayze. Just look at the size of it. I really need a wide angle lens to get it all in. So many buildings! And an Army sailboat. 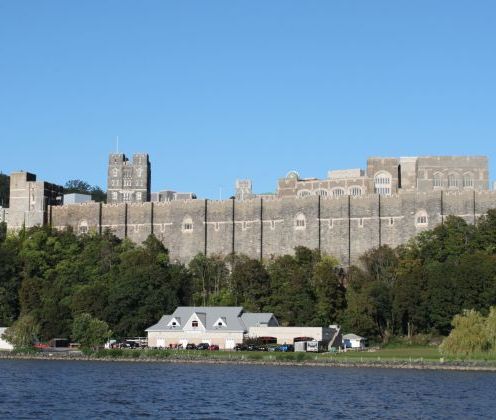 The entire central campus is a national landmark and has so many historic sites, buildings, and monuments.

A little while later, we hear on the radio about the barges and workers around the Tappan Zee Bridge.

When we came back in 2015, they were building a new bridge. Now, 4 years later, they are dismantling the old bridge. 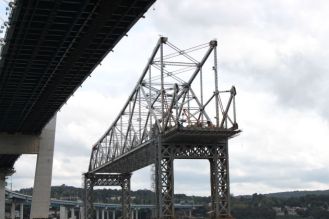 As we passed under, we met a tall ship and looking back at the bridge, you can see that the old bridge is almost gone.

And soon we get our first clear glimpse of the city that never sleeps!

The Harlem Bridge is on our port side.

Just look at all those skyscrapers! 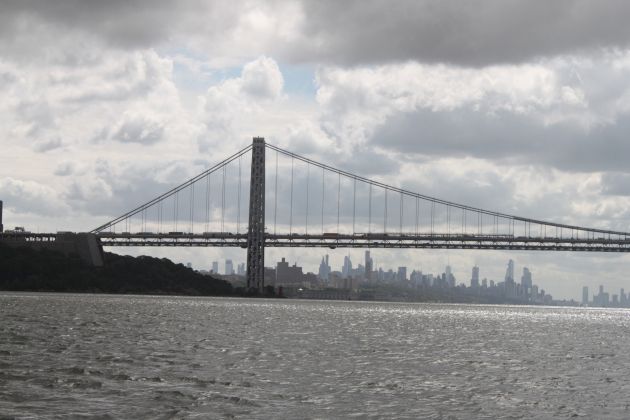 Because of our 3 nights we spent locked in Lock 11 on the Erie Canal, we didn’t feel we could take time to spend in NY City. In 2014, we had a mooring ball at Port Washington on Long Island and we took the train in to Penn station to the city. And when we left by boat, we went down the East River, so we had different views of the city….and lots of bridges. The Brooklyn Bridge is really something to see. Maybe on our way home, we will get to stop and go into the city again and our girls will come to visit. How fun would that be, the Taylor girls in NYC!

Here are a few photos of the city as we motored along the Hudson River.

79th street mooring balls. We stayed here on our way home last time. You can get a ball for $30.00, dinghy into the dock and up a couple of blocks is Central Park

This massive yacht that we met dwarfs the buildings on land 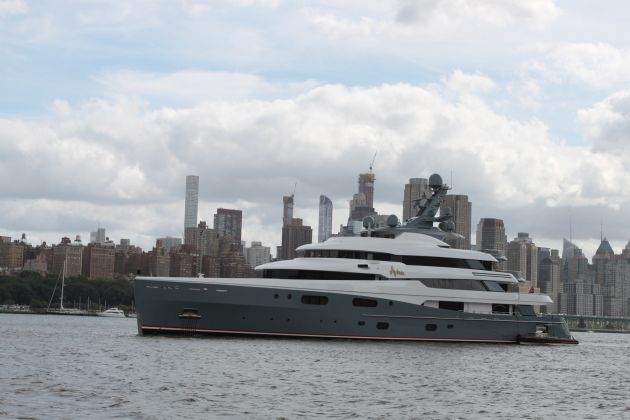 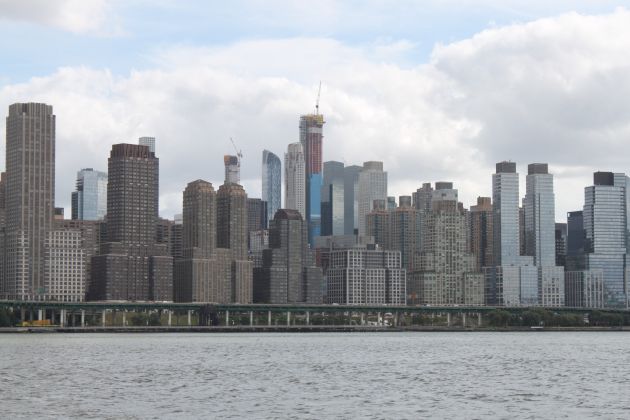 Midtown Manhattan. I see the Empire State Building which has been the set for movies, most notably for me, “Sleepless in Seattle”. 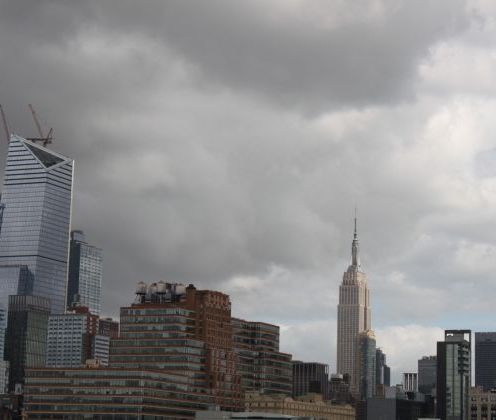 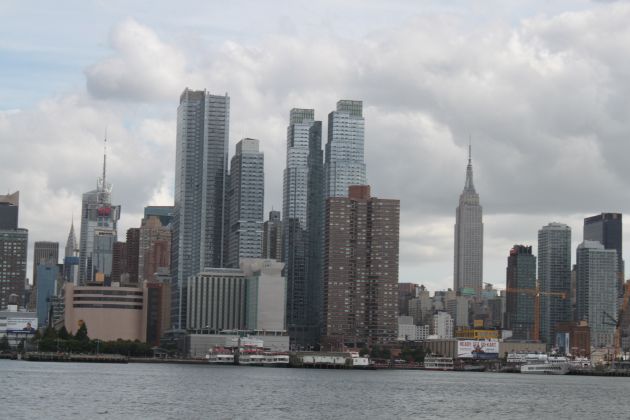 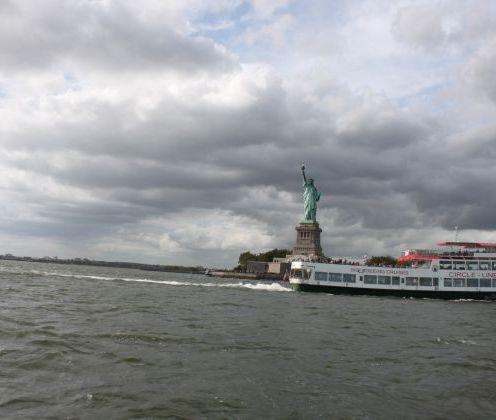 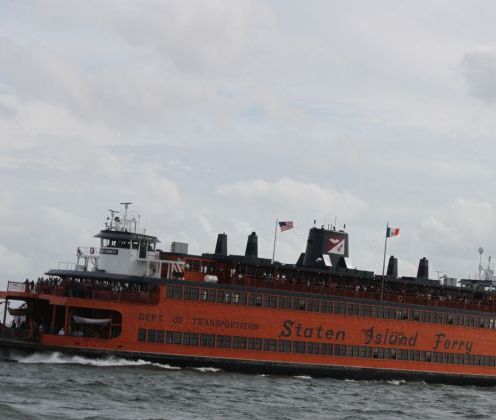 The statue of Liberty

We motored away from the city and get on our way. Always see lots of cargo ships and tugs.

By then the water was getting very rough and the waves were getting higher. They were 4-6 feet and some were as high as 8 feet. They were crashing over the bow and Persuasion was being bombarded on both sides. Barry Duckworth headed toward Sandy Hook, thinking that’s where we were headed. It seemed to be rough, even in the mooring field and anchorage at Great Kills Harbor. We were so glad to get our anchor down at 17:20. James from Barry Duckworth, texted us to let us know they were safe and tied to a dock.

Highlights today were seeing West Point, New York City sights and of course the Lady, the Statue of Liberty!

Lowlights were the terrible rough water and ride after seeing NYC.