Oh my, they were right about the cold front, 45 F but feels like 37 F with the wind chill. We had the buddy heater on this morning. After breakfast we uploaded the blog for the 9th and made a couple of calls. It was 54 F in our enclosure when we left the dock at 08:30.

It was not raining but the fog was making the windows wet. I had to keep wiping them down for awhile. You can see the fog blanketing the river.

Just before our first lock, Mike notices a blue heron on shore. He blends right in with the rocks on shore. 😉

And at Lock 23, we’re going down. We were the first boat to be locked through today and for the majority of the locks, we were usually in the lock by ourselves. I’m sure in the summer , these locks get full with recreational boaters. This will be our last lock on the Erie Canal. 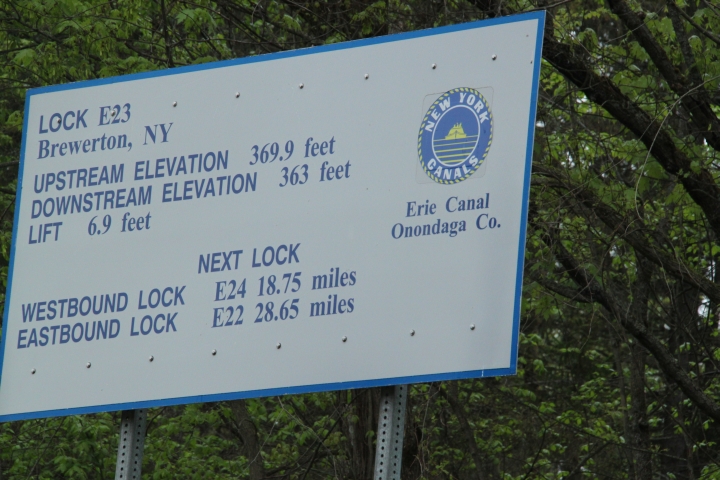 The lockmaster told us to be careful as we exited the log as a lot of diseased trees had been cut down and some got in the water. There were just a few by the side of the lock but a lot sure were down on the land.

Lots of nice places along the river here and a marina with some boats in already.

Very picturesque here as we motor along.

Getting close, here is the sign. No more westbound now, we are northbound and heading for the Oswego Locks. 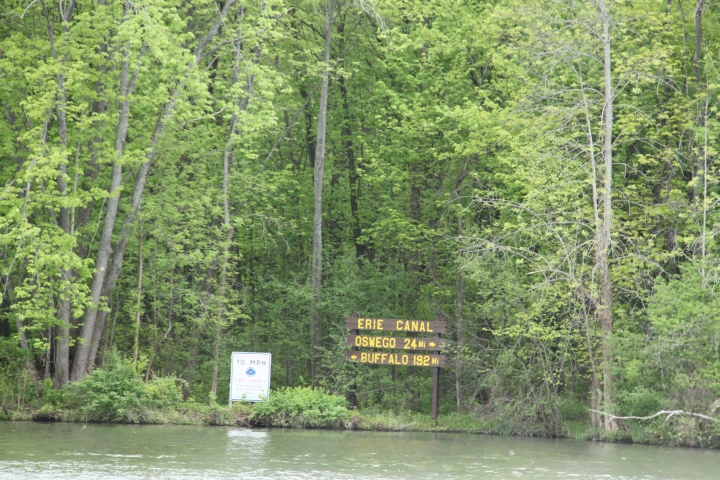 Some sights we see along the Oswego River today:

The first lock of the Oswego Canal is at Phoenix. It looks like a nice little place for a stopover. And they have a Canadian Flag flying. 🙂

Other photos of the town.

Then we waited for the lockmaster to lift the bridge before we exited the lock.

The next place we came to was Clay, NY. Very nice properties here too.

Another lock finished. And a boat was waiting to go southbound as we exited the lock.

Lock 3 was not far from Lock 2. We saw some ducks along the wall.

We can see the spray from the falls and when we hailed the lockmaster, he said we would have a 5-10 min wait as the lock was filling up for a barge that was coming through. We see another sign for the New York Canal System.

There is a great looking park here with places to tie up your boat. With a restaurant bar called “ON The Lock”.

We asked the lockmaster about Lock 4. We didn’t see anything about it in Active Captain. He said there was no Lock 4. There were plans to build it but then realized that they didn’t need it. The paperwork and plans were already drawn up for the whole system and rather than have the plans all redone and changing the numbers, they left it as is. So, it will be 6.45 miles to Lock 5, not 4. We are just whizzing through these locks, eh? 😉 Out we go, on to the next.

Very old looking canal wall here, isn’t it? Quite something, to think of all the work and time gone into this canal system so many years ago. And seeing the water rush over the ledge and rocks. is lovely.

We notice a plant on the hill and beside it was the one from another era. The windows are broken, the loader (possibly for grain) and the pylons in the river are where the ships used to tie up. My how times have changed.

And this little place. We wondered if it used to be a government building of some sort.

Looking ahead, we can see we are getting close to the dam. And then looking to our side, we see a painting on the back of this little building. Pretty neat.

And here we are.

This is looking back at the lock and then some of the old buildings along side the canal.

And this is looking back at the dam with the bridge behind it.

Looks like we are in Oswego. We can see more of the city beyond the dam.

Heading in to Lock 6.

These pigeons seem to be unbothered by any of the goings on in the lock as they flew in and sat on the door. And another lock finished.

Looking back at the dam. The power of that water!

Another older building along the canal. And how about the sign on this building. I bet one hopes they get time to exit the river!

That’s the end of the locks today. We tied up along the wall before the bridges at 14:30.

Here are some facts of the canal that are beside the wall.

And some of the views of the city across from us.

It is still chilly and windy today so we decided to stay in. We will go up to Tim Hortons for breakfast tomorrow. Another sign that we are close to being home.

Here is a shot I took in the evening just before turning in. The bridges ahead of us.