Well, we had the buddy heater running this morning. Took the chill off just fine too! We weighed anchor at 06:30 before a lot of Portsmouth or Norfolk was even awake.

As we pull out, we do see a dredger out working and lots of terminals.

And ships. The security is at work guarding the ships.

As we get closer to the loading docks, we see they will be busy unloading a cargo ship that we watched two tug boats push over. A second ship waits at the other terminal.

We see the coal pier where, in October, we watched cars loaded with coal run down the tracks. This morning, though, they were not running.

As we wind our way further we see the Norfolk International Terminals.

We meet a tugboat that is no doubt off to his next cargo ship and meet a huge one that is so high in the water that he must be coming in to be loaded.

We see a lot of naval ships.

And some more. A couple of aircraft carriers.

What we did notice is that there were many more ships here in the fall, behind this restricted gate. The hospital ship was gone and many others. Possibly some in dry dock or gone where they are needed. We noticed the Navy Police security boat is still stationed out front though.

We motor on, take some photos of leaving Norfolk behind.

We see the Hampton hospital and more buildings in Hampton on our port side as we head out into Chesapeake Bay.

After awhile, we see this boat coming toward us. Loaded with traps. Looks like the “Only Son” could do fairly well with this many traps.

The waves were building to 2-3 feet just before lunch but nothing uncomfortable.

We pass this nice looking lighthouse. 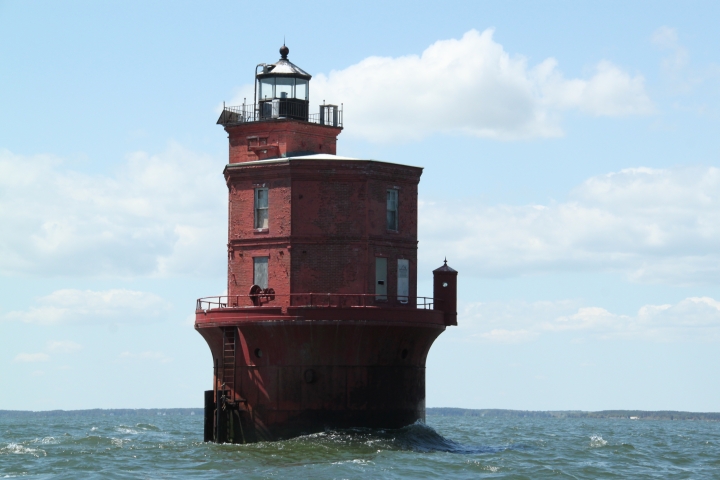 The winds and waves calm down and we see some nice places on the beach.

And some more. The first one is a community center.

We see the marina on the right as we pull into the creek on the left.

After supper, Mike uploaded the blogs for the 24 and 25th. I could hear a bird singing outside when I took a sunset photo.