It was a quiet, peaceful night at anchor here and the rain let up just before we headed to bed.   It was chilly and damp this morning though, and just as Mike was heading out to weigh anchor, it started raining. We got away at 06:40.

We could see the steam just off the water as we motored out. 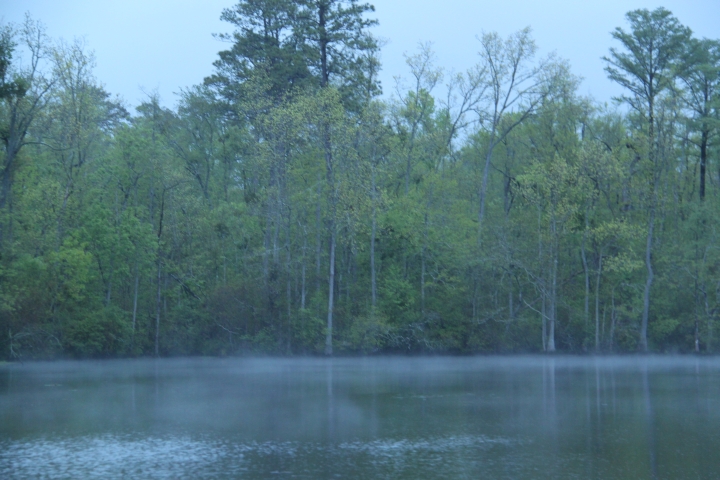 We took the Turner Cut towards the Dismal Swamp.

Although the day was wet and dreary, the greenery along the sides was lush and made for great photos. Just look how straight it is. Looks like a long hallway. And the steam was still rising off the water.

We saw lots of foam in the water along the way. And a crane on a stump ahead. We had to take a sharp turn to the right to continue on down to the lock. We see a very nice looking farmhouse just before the lock.

We arrived at the lock a half hour early so tied up alongside. We see lots of vines growing over some of the trees.

While we waited I took some photos of the area.

Meanwhile, as it was almost time for the lock doors to open, we untied and backed up. Another sailboat had arrived too so we went through together.

Once inside, the doors close and the water rises 8 feet.

That was quite a rise. We leave the lock and head on toward the lift bridge. Mike’s dream of boating on the Dismal Swamp has come true. We are here.

Once boats are locked through, the lockmaster gets in his truck and drives down to open the lift bridge. In the 6 minutes or so it takes us to get there, we see a few sights.

Then we head under a double bridge. Again, we have that long hallway look.

The State Park is here too with a Center across a foot bridge that opened when we pulled up. It is open today at 09:30 and has trails along the canal. It is cold and rainy. On a nice day, it would be a great hike.

The folks on the dock had a Nordic tug 37 and were from Maine. They said that they had spent 3 nights on the dock here. She gave us some pamphlets on the Dismal Swamp. We decided to head back out as we wanted to catch the opening of the next lock at 13:30.

Straight ahead we go again. And we look behind and the Nordic tug is coming too.

The water in the Swamp is amber coloured and is unusually pure. It is preserved by the tannic acids from the juniper, gum and cypress trees. These conditions make it difficult for bacteria to grow and many years ago, before refrigeration, this water was stored in kegs on sailing ships as it was potable and considered chemically pure. Some people even believed that it had magical qualities and drank it regularly to prevent illness and promote long life.

We pass the 25 mile post and see the sign Welcome to Virginia. Of course, we take a shot of the other side that says Welcome to North Carolina.

This is a shot of the feeder ditch coming in into the Swamp. We were almost past it, when I snapped the photo. It is from Lake Drummond which is a circular lake covering 3,000 acres in the heart of the swamp. The average depth of the lake is three and four feet and it is usually pure water. This lake supplies water for the Dismal Swamp through the feeder ditch.

Some more photos of along the Swamp.

This was called a Farmers bridge on our charts.

One of my favourite’s.

We go through the lift bridge at Deep Creek and the Nordic tug tied up at the dock overnight.

Ten minutes later we were at the lock. The bridge attendant went ahead with the truck to open up the lock. The conchs here are from boaters that have gone through the locks. He said some even have the boat names on them.

This time we went down 8 feet.

We are out of the Dismal Swamp and it certainly did not disappoint the Captain or myself either.

We head along toward Portsmouth. This open deck bridge was noisy as we went under. And right away we notice the difference from here to where we have just been. The busyness of plants and factories.

And lots of bridges and lift bridges.

We pass the Norfolk Naval Shipyard.

So many ships on both sides and the Ocean Marine Yacht Center.

And it is right around the Ocean Marine Center that Mile 0 is of the ICW. We have finished it! We motor down the Elizabeth River and then pull into the Tidewater Yacht Marina for fuel and water.

We drop anchor just outside the marina at 16:00. It was quite a different bay when we were here in October. Just one derelict boat and a trawler along with us today.

Here is the view from Persuasion.

After supper, we checked to see what movie was playing at the Commodore. We so enjoyed the dinner theatre in October, we thought we might go tomorrow night. After checking, we decided we would not stay and got the dinghy loaded on the bow so we could go out on the Chesapeake tomorrow. That took awhile so no blogs uploaded. Chilly again tonight. We added an extra blanket on the bed. Another sign we are getting further north…….and closer to home. 🙂