It rained in the night and was still raining this morning.   Before breakfast this morning, we had to remove last nights “fix it”. The Captain had put his knees on his glasses that he had laid on the cushion in the cockpit. (glad it was him and not me this time, as I’d broken Sarah’s) His bow snapped off and once again the epoxy was his solution. So far, so good, he’s wearing them and all is well.

I finished 2 blogs last night so Mike uploaded them and we did some Facetimes. It was so cute hearing Margie, Tayton, and Easton say Happy Birthday. And seeing Elle lift up her hands to try and come to Grampie. Grand kids are such treasures. 🙂 We also got caught up with Sarah on the wedding plans and talked to Becca while she was enroute to a cycle race. Her bruises are healing nicely and once again, we were reminded how incredibly lucky she was not to have sustained worse injuries.

We set out with our cart bright and early to get some groceries and haircuts. It was just a 20 minute walk. TJ came down to the dock this morning and asked if we would need a car. Like I said, they are very accommodating but the rain had stopped and we need the exercise. We took the umbrella just in case. TJ had told us there was a salon beside the Publix. It was a great place and we feel more human now. lol. And we were thankful to get some fresh fruits and veggies again. On our way back, we got a few photos. This Sonic is like the A& W drive-in that we had in NB many years again. Where you could order from your car and they bring your food to you.

Some of the trees with the Spanish moss are beautiful here.

Here’s the birthday boy smiling and sporting his haircut. The restaurant we ate at last night is in the background. Check out the license plate on this sports car in the lot, Becca.   The Captain is on a mission to get the groceries back and shove off the dock. TJ had been out but noticed we were back and asked if we needed help off the dock. He and his wife and little girl are leaving in June to go down to the islands. Apparently he works 6 months on and 6 months off. Bet they will be glad to be away from the gnats here. Although he says once it gets really hot, they go away.

We shoved off at 10:30 and were on our way. We snapped a photo of the famous Lady’s Island Bridge. It was the swing bridge we had came through yesterday. And the bridge that Tom Hanks in the movie, Forest Gump, was running across. 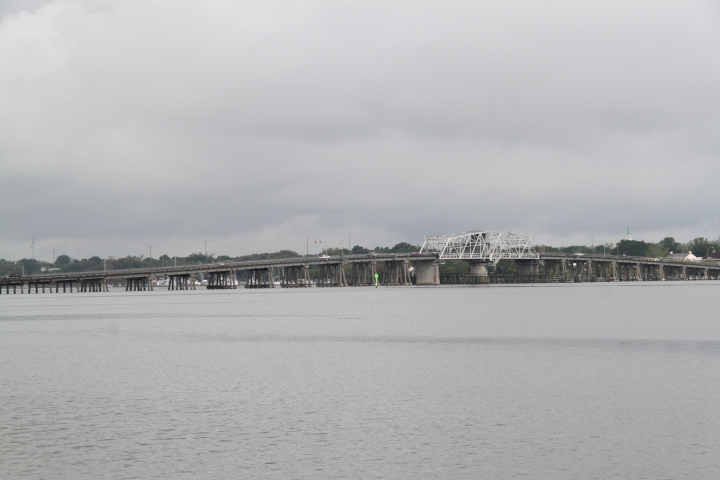 We also got some shots of the homes along the river.

This picture was made blog worthy because of the sky’s backdrop with the bridge and water in the foreground as we left Beaufort behind.

And the dolphins came out to wish us farewell too.

We weren’t exactly sure what this was. We wondered if it was a fuelling station.

These boys were out checking their crab pots today and we saw what looked to be old floating docks washed up on shore.

Then we headed out into the Coosaw River. 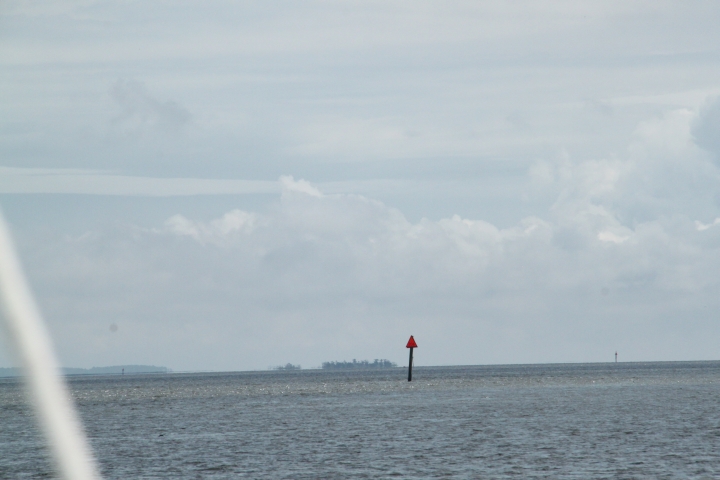 Further along, we noticed all these tents. Looked like someone was having a celebration of some sort. Lovely houses all along here too.

We got a push from the tide again today for quite awhile. Our highest was 9 kn before we got into fighting the current.

Motoring through the ICW today was nerve-wracking to say the least. Even following the line on your charts does not mean there is good water. Some places had only a few feet span from side to side. It made for some shots of egrets and herons.

And then it happened……we hit bottom again. Only this time we thought we may have to wait for the tide that was coming in. Eventually we were able to get going. Again, with not being well marked and the charts saying we had enough water but didn’t meant we were ploughing. Yep, this marker marks the spot close to where we sat for quite a few minutes. And to make it worse, while we were sitting there, so many dog and horse flies were around. We swatted at them for quite awhile. Finally we got moving.

The colour of the water for most of the ICW looks like this. And that is not from us being aground either. That explains the smile on all the boats. We saw some people out fishing for supper as we went under a bridge. There is a 10 ft tide here.

We also passed by a shipyard.

We met another small cruise ship today. When we met one named American Glory near Fernandina Harbor Marina the other day, we thought it may have been a tour boat. Now we’re not too sure. That one and this one as well are from Delaware.

We pulled off the ICW and dropped anchor at 17:15. After supper, Mike uploaded a blog That’s 3 today that he’s uploaded. I think we might be caught up again. 🙂