It wasn’t a great night’s sleep here. The anchor was fine but it was windy and a bit rolly. We didn’t have far to travel today so after breakfast, we played 4 pics for awhile. We weighed anchor at 08:20. The kids stayed on watch for the sand bars as we left. You can see in the photo of the anchorage how the trees are bent over from the wind.

We saw a plane coming in to land at Normans Cay right after we left too. Then Sarah read some in her nutrition text book, James enjoyed the sun and wind and I made a batch of english muffins and set them to rise.

We noticed a large dive boat anchored and a dinghy nearby. We had heard on the VHF this morning about divers near Highbourne. Mike hailed them to confirm where their divers were. We were not close to them but he thanked us for calling.

We arrived at 10:10 at the marina. There are all kinds of yachts in here.

This little guy met us at the dock.

We took on fuel and water and paid to leave our garbage. $5.00/bag for the first 2 bags and $25.00/bag for every bag thereafter. Thank goodness I only had 2 bags, $10.00 was enough. They said we could leave the boat on the dock while we went up to the store. It is very pretty in here. The store looks fairly new too and besides groceries, has some souvenirs, and alcohol.

I thought I may get some hamburger.   They had l lb little sausage tubes of frozen hamburger and they were $13.95! And the best before date was April, 2014!! No thanks. I settled for frozen chicken to barbeque some night which was $23.00 for 4 pieces and I also needed bread. It too was frozen and was $6.99! Not even homemade!! Oh well, we are in the Bahamas and not home in the snow, so lets enjoy!

We followed the path over to a new restaurant here called Xuma with a great view. Everything here looks very well kept.

The beach is lovely too.

We walked back to the boat. The docks here are lovely and great barbeque pits too.

We then stopped to see some nurse sharks at the fish cleaning station. There were some baby ones too but they had gone under the dock.

And here is our little egret again.

We left the dock and got the hook down. After lunch, Sarah and James dingied out to do some snorkelling and in to the beach. I made a chicken vegetable soup. We did get internet today and found out that Mike’s mom had been taken to the hospital. She was very weak and they did some tests and she’ll be ok. Amber had talked to Mike’s sister and to Grammie Pat. She said that they are looking to find a home for her with doctors on duty. (she has been in a private nursing home for years with Alzheimer’s) We think she does not know us now, but can’t know that for sure. It is an awful disease. 😦

Sarah and James wanted to go in to the restaurant for supper. It is by reservation only. We radioed the marina but they said they could either call the restaurant or come in and left at 16:00 to go in and see if there were any openings. They clean up pretty good, eh? 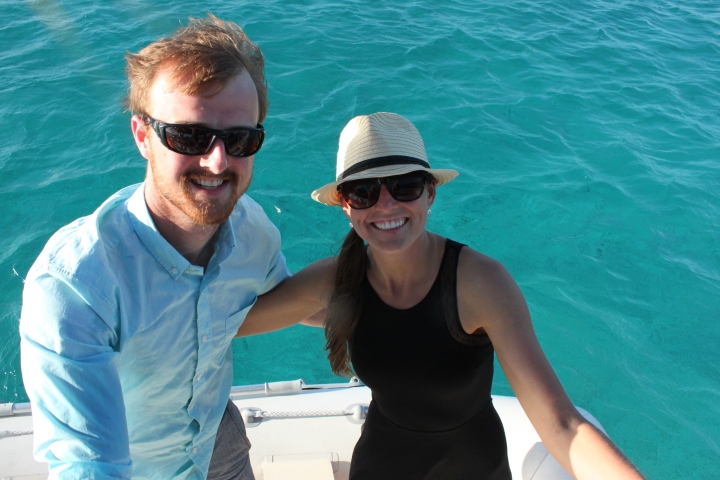 They took our mobile radio and hailed us to say that the only reservation they could get was at 20:30, so they had a drink on the patio and then came back for some soup and english muffins.

We watched the sun as it went down and disappeared. We are so thankful to be here and enjoy these sunsets. Then it was movie time. 🙂