After breakfast this morning, Amber and Jason went for a dinghy ride and the kids had one more time on the beach. Here is Tayton trying on my mask. They wished they had brought his and Easton’s, they would have enjoyed seeing all the pretty fish.

We headed into the Nassau Harbour Club after lunch. I noticed your comment Bert about you visiting the club in 1981. Apparently shortly after that, it closed down for awhile but recently it has undergone some renovations on the rooms and is in the process of updating more. I guess it has been taken over by the same company that started the plaza across the street and they are hoping to get the restaurant open and certainly need more work on the washrooms and laundry facilities.

On our way over, we met the cruise and party boat coming out of the harbour. They were sure singing and having a great time. 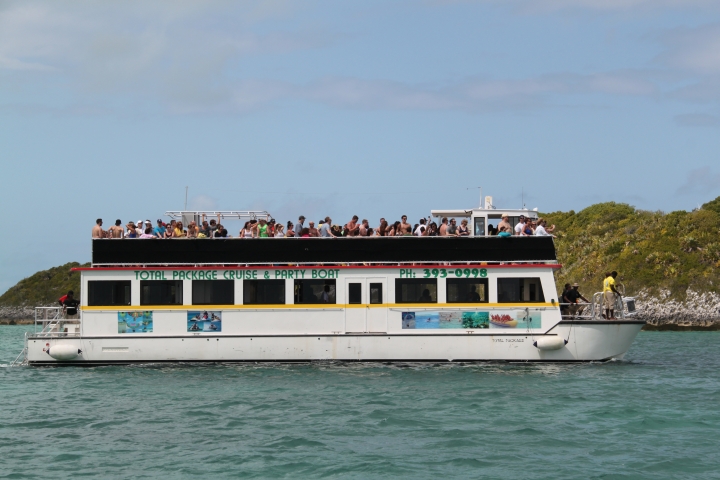 Easton had fallen asleep and although, Elle fought it at first, she was sound asleep by Easton by time we got into our slip.

We got all settled in and later, we took Elle and Tayton to the swimming pool.

They had alot of fun in the pool.

When Easton got up, he joined them.

They love the water. They are so used to the water from having a pool at home.

Amber and Jason went to pick up a few things at the plaza and brought back pizza. Yummy! After supper, they packed up some things and we watched the Lego movie with the kids. And then they were exhausted. Look at Elle sleeping on the salon cushion. lol

They will be off for home tomorrow. 😦