We awoke to the crowing of a rooster this morning. There is a resident one or two on that island with the pigs on Big Major. The kids are sleeping so well here. Probably all the swimming and fresh air.

After breakfast, Jason got on his mask and put on our new anode.

And here’s a shot of Persuasion at anchor. Those little life jackets look so precious, don’t they?

Mike, Amber and Jason dingied over to Thunderball Grotto(where a James Bond 007 movie was filmed) to go snorkelling while the kids stayed with me on the boat. We didn’t have an anchor for the dinghy so Mike held on the side of the cave and got some shots and then Amber stayed with the dinghy while Mike went in. I guess it was amazing inside with the light shining down from above and all the different fish.

When they got back, we motored Persuasion over to get fuel and water at the Staniel Cay dock, then anchored out so we could dinghy to shore for lunch and some produce. Check out the size of this yacht on the dock. And it was neat to see the sign for the grocery store in a tree. On our walk up the hill, we found a cotton bush and some roosters!

Looks like one guy thinks he owns the road. 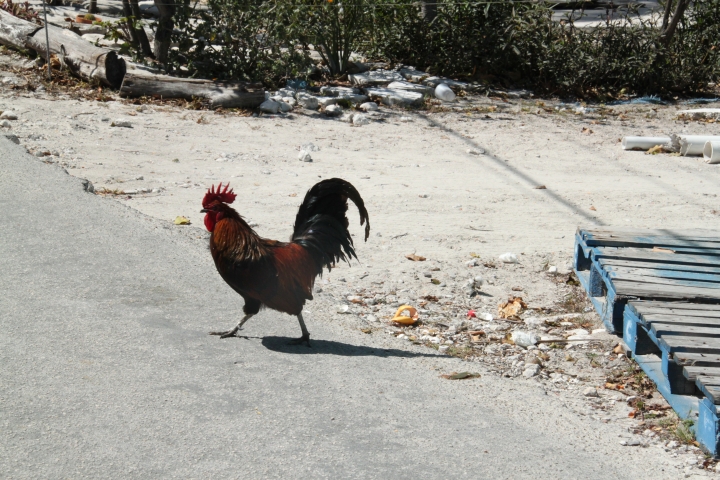 We found no restaurants up near the grocery store so we got back in the dinghy and motored over to the yacht club.

There was some neat looking cottages along the waterfront.

The yacht club was a bustling place with lots of dining rooms. We chose the room with the keg chairs and the food was good. And on our way back to the boat, we found another boat for you Sarah, with your name on it. Well, your nickname.

We then motored Persuasion back to our anchorage across from Big Major. Amber had 2 suckers left and wouldn’t you know it, both the boys wanted the yellow one. You can see Tayton’s disappointment here, We tried to tell him, he’d love the red one. And when he finally tried it, he did. Easton looks so happy that Tayton was loving his sucker.

Mike, Jason and the boys went back in to see and feed the pigs. Easton was sure enjoying them.

And here is one of those roosters who was crowing this morning.

They came back for the rest of us and we dingied over to Easton’s “scary beach” where Mike husked the coconuts we had found for the boys.

They were surprised to see the little coconut inside. Although they were not fans of the coconut milk or actually eating the coconut. It is a great snack, I think.

While Grampie and the boys were busy with the coconuts, Elle was enjoying the water.

And then it was time to get back to Persuasion for supper. We cooked fried chicken in the pressure cooker and Amber cut potatoes for fries so perfectly that they looked better than McDonald’s and she had to cut so many. We should have gotten a photo of them all stacked up . Elle seemed to love them. And as usual, there was an amazing sunset.

And before bed, we let the boys watch one of their shows while they had a night lunch. They look rather engrossed in it, don’t they? 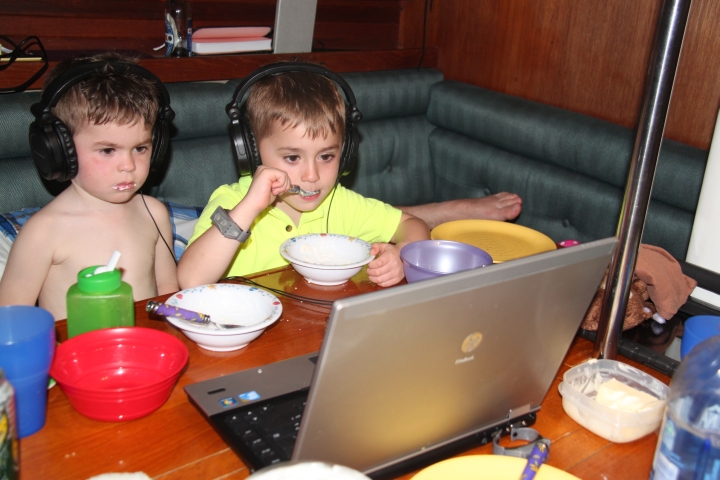 It was another fun filled family day in the Bahamas. 🙂